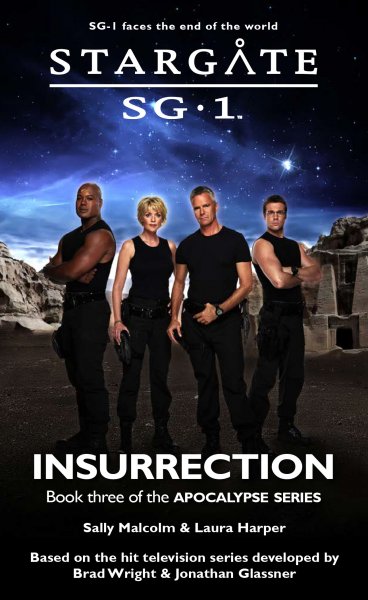 Between a rock and a hard place…

SG-1 faces a terrible choice.  With the lines between friends and enemies blurring, the team must choose where their loyalties lie—and how much they’re willing to risk to save their world.

While Dr Daniel Jackson and Teal’c return to the refugee colony on Arbella, in search of allies in the coming battle for Earth, Colonel O’Neill and Major Carter discover a piece of Ancient technology that could change the future—and the past.  But if using the device results in their own extinction, do they have the right to sacrifice their new friends to save a world they’ll never know?

In this thrilling conclusion to the STARGATE SG-1 Apocalypse trilogy, SG-1 must decide how far they’ll go in the battle for Earth’s future.

You still haven’t answered Carter’s question,” O’Neill said. “What do you want with us?”

Hecate paused for a moment, as if changing tack. “Very well,” she said. “To put it simply, I need your help.”

The colonel barked a laugh. “And why the hell would we help a Goa’uld?”

Frowning slightly, Hecate tipped her head. “Wrong again, Colonel. We both want to free this world—this galaxy—from the Wraith, and to destroy the abominations that their queen is creating.”

“You know about that?” Daniel said. He sounded cautious, interested despite his better judgment. “About the Goa’uld-Wraith hybrid?”

“I know a great deal, Daniel. Including how to destroy them—all of them.”

“All the hybrids?  You mean there’s more than one?”

“There will be.” Hecate swept her imperious gaze across them as if measuring each in turn. “There will be thousands.”

“Janet Fraiser always believed that one day the great SG-1 would return to save Earth,” Hecate continued. “Many doubted her.  Many called her faith foolish and condemned her as a traitor.  But now you have the chance to prove that she was right, that her faith in you was justified.”  Hecate’s smile was suddenly very much like Janet’s, full of quiet conviction and stoicism.  “Your world needs you,” she said.  “How could you possibly turn your backs?”