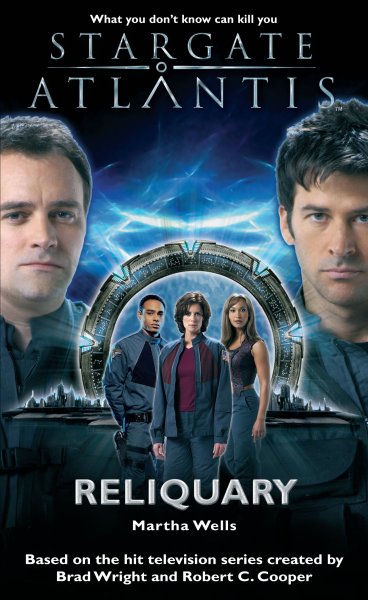 While exploring the unused sections of the Ancient city of Atlantis, Major John Sheppard and Dr. Rodney McKay stumble on a recording device that reveals a mysterious new Stargate address. Believing that the address may lead them to a vast repository of Ancient knowledge, the team embarks on a mission to this uncharted world.

There they discover a ruined city, full of whispered secrets and dark shadows. As tempers fray and trust breaks down, the team uncovers the truth at the heart of the city. A truth that spells their destruction.

With half their people compromised, it falls to Major John Sheppard and Dr. Rodney McKay to risk everything in a deadly game of bluff with the enemy. To fail would mean the fall of Atlantis itself – and, for Sheppard, the annihilation of his very humanity…

The spiral design in the center of the chamber floor was moving, becoming three-dimensional as the little metal tiles forming it shifted fluidly. The whole floor was still vibrating, making the glass and metal debris jump and dance. Something groaned again below their feet, and the spiral began to sink into the floor.

Standing at John’s elbow, McKay glared at Kavanagh, his mouth twisted in annoyance. “What did you do?”

John wasn’t thrilled either. “Some warning would have been nice, Doctor.”

Teyla and Ford watched the spiral uneasily, Kolesnikova a few steps behind them. Kavanagh shook his head, his eyes still on the metal sinking into the floor, his gaze rapt. “I wasn’t sure it was really here, if the power source was still active. If I was...imagining it...”

The groaning rumble of metal parts undisturbed for ages was growing louder, and John wasn’t sure he had heard right. “What?” he said, having to raise his voice over the din. “Why did you think you were imagining it?”

“I was imagining what?” Distracted, Rodney stepped sideways, moving along the edge of the shaft, craning his neck to watch the spiral’s progress.

“Wait.” Rodney straightened up suddenly, looking at John. “It occurs to me that something may come out of here that could kill us.”